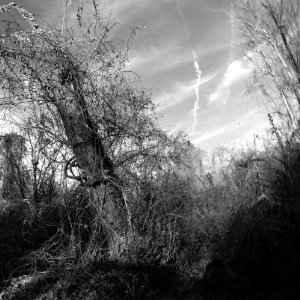 So begin the first off key shouted words on Harvey Milk’s latest album A Small Turn of Human Kindness.

Granted, this is after nearly 10 minutes of slow, drudgey (lest I use the word sludgey) riffs in which all three instruments burst out perfectly syncrhonised blasts with lots of air in between. With baited breath you’re forced to wait for the next punishing sounds to kick in. And then wait for more.

And then Creston Spiers slowly turns on the misery faucet that is his unpredictably off key shouted, tortured vocals. And I’m sold.

The earnest misery of this album, the forced amateurishness of a band that’s obviously plied their trade professionally for decades, the spaces between… harken back, to me, most obviously to Swans’ first foray into the slow punishing harshness that was Young God. Seems like everyone else is just referencing other contemporary ‘doom’ or ‘sludge’; I hear the torch bearers of Black Sabbath’s self referential opus. This is bored, sickened torture that’s been going on for years and years and will never end.

Witness the uncharacteristically pliable ‘I Know This Is No Place For You’ about expectant parents completely unprepared and ill-suited for pregnancy. ‘What kind of father will I be when the baby comes’?

This is a revisitation and improvement upon what was once called ‘Scratch Punk’ and when that term was discarded, ‘noise-rock’ for lack of a better term (and that’s not a good term); dealing with the actual issues that make ‘noise-rockers’ cranky and frustrated all the time. Not murders and rapes (scratch acid/Jesus Lizard), not artsy drug taking and misunderstanding (pussy galore); ennui and endurance. A stupid endless camping trip. An unwanted pregnancy. Seeing a baby deer orphaned and still clinging to its mother in the woods. Knowing how fucked you are and how it’s all your fault.

All this couched in torturously slow moving metallic riffs and often ending in Sunn like drones. Bleak, yet broken by the kind of virtuosic metal leads and choruses that might be found in something just shy of/mocking inspirational hard rock. From start to finish, an unbroken experience that makes you hopeless and leaves you with the hope of gallows’ humor. ‘Consider the goddamned lilies of the field’;

“I still have to day
that it’s not all bad.
The trees and the sky
are still something.”

View all posts by scottkoenig2